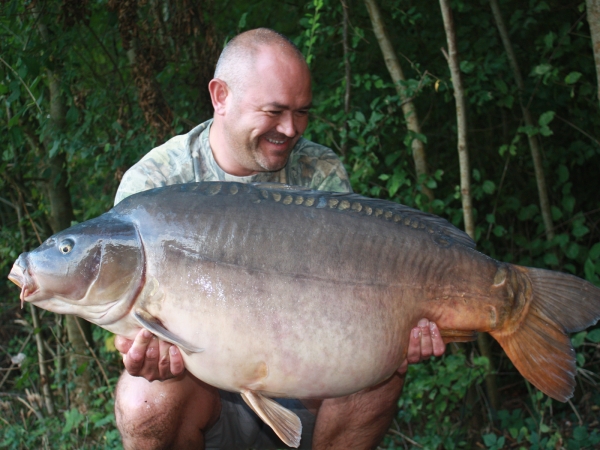 Having fished since I was young enough to do so, starting out in the parks and canals close to my East End home in Stepney Green, I got the bug for carp after seeing some older boys catching them in Victoria Park. Since around 1989 I have been solely fishing for those elusive scaleys, at first in and around the Darenth Valley where I was influenced by some fantastic anglers. These include Lee Jackson, Bob Morris, Micky Sly and the late and great Alan Smith. It was here that I caught my first 30, a carp by the name of Arfur at 30:08 from the Small Lake at DDAPS Sutton at Hone. From catching 30's here I moved onto numerous venues in Essex including the infamous Manor Farm in search for some 40's and it was here where I caught my first English and Winter 40 known as the Northern Linear at 46:04. I moved off of Manor Farm after capturing a few of the 40's and onto Cotton Farm in Kent run by Lee Jackson to fish for those Dark and Golden Commons. After achieving my targets capturing the largest resident known as Little Big Common at 37:14 and Goggle Eye Common at 35:08 to name a few. I am a Consultant for G-Force Tackle, Angling Intelligence and Advanced Technology Tackle. This year I have moved onto Medway Valley Syndicates Big Lake in search for some Dark English 40lb Commons!

Being a family man my typical UK fishing consists on average of one overnight session a week that can be anything between 12 and 24 hours. I hope to achieve a new target of catching a 40 pound Common this year. I have been using Mainline Baits have been a major part of my armoury for the last 10 years and solely using it for the last three years.

I also like to travel to France at least once a year for a week session having fished a number of venues that include Maleon, Domaine Des Iles, Etang Le Fays, Mar Peche, Les Quis, Les Teillatts, Lake Serene, Abbey Lakes and the River Yonne.