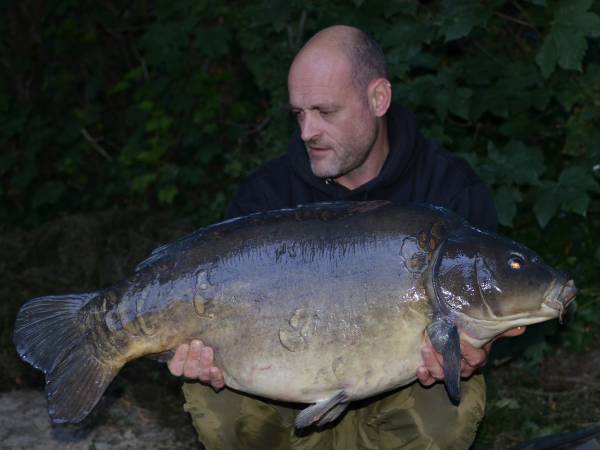 I have been fishing for more than thirty years with the last twenty being dedicated solely to carp angling.  My early fishing was match orientated where I managed to win a number of club championships and represented my club at National level.

Carp fishing has always been a part of my angling but after a period catching big Chub and Barbel on the River Kennet I decided I wanted to target something bigger on a more serious footing.  I made the jump to carp fishing and have been doing it ever since.  The social side of fishing means a great deal to me and am more keen to get out on the bank than I have ever been.

My interest nowadays revolves around the pursuit of large, thoroughbred, English carp and I generally target difficult waters.  I have banked a number of carp over the 40lb barrier, the most memorable of which was Horton’s Shoulders.  My personal best Mirror is 45lb 6oz while my biggest Common to date is 45lb 4oz.

I have a bit of a reputation for making hookbaits (particularly pop-ups) to suit my fishing.  The attractors and bases I use for my hookbaits all come from Mainline’s range and I wouldn’t want it any other way.  I’d feel severely hampered without access to the most productive bait ingredients money can buy.

Spending three nights fishing, most weeks, means that I have very specific requirements from my bait and Mainline Baits certainly fulfil those requirements ........ and some.  The question of whether or not I am using the right bait just doesn’t come into the equation and I can just concentrate on my location and angling.  My knowledge of boilies is limited but I know all I need to know.  Mainline Bait catches carp – simple!

After a brief flirtation with making my own base mixes and baits I was introduced to the CP2000 from Mainline which was so much more successful.  When I started fishing Horton, although out of my depth, I caught from my third session using the Grange. Since then I have used the Assassin 8, NRG, and Maple 8 and caught well on all of them but kept going back to the Grange. In fact I have used it in various guises for at least ten of the last fourteen years.

As far as I’m concerned a boilie should catch from the off. If it has to be introduced to the fish by the kilo before they’ll eat it then it isn’t right.  Each and every one of the baits I have used from the Mainline stable have got better the more the carp see it but fish find them attractive from day one onwards.

With the Grange no longer available I had to bring myself up to date and get on a new bait. Cell or New Grange was the dilemma and preferring a boilie that has proven itself long term I decided on the Cell. Well, what can I say other than things have moved on in a big way. I knew it would be ok just by looking at what people were catching on it but it really is outstanding. I’m fishing Dinton at the moment, where half a dozen fish a year is reasonable and I’ve only suffered three blanks since the start of the season. Such is my confidence in the Cell that I plan to be using it for the next ten years!

I write regularly for Carpology and have penned pieces for Carpworld, Advanced Carp, Big Carp and Freespool as well as contributing a chapter for the Horton Chronicles.  I have also been involved in some filming work for Atomic Tackle.