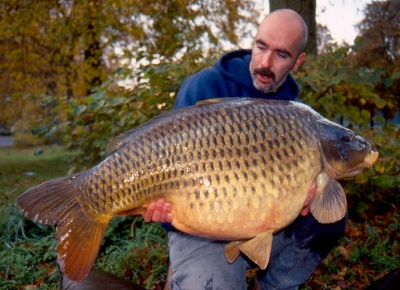 Belgian carper, Tommy De Cleen tells you a little about why he is so pleased to back fishing with Mainline Baits...

This story starts at around 98/99 I think it was, when Danny Fairbrass used to fish a few times a year in Belgium with me and some other guys. So it was Danny who introduced me to Mainline Baits and it was then I started using it and buying it for a few years and after some time I joined the ranks of the Mainline Baits team. Fishing with baits like Fusion, Maple-8 and Activ-8 (Activ8 is still my favourite bait of all time) and being quite successful on all the waters I fished at the time in France and Belgium small and big canals and rivers.

Then all of a sudden this year when I was fishing at Ladywell in the UK someone says to me, I would like to see you back on the firm? I say Mainline? Yes was the answer, it would be great to see you and your mate Erik back at Mainline Baits. After returning home this kept me awake so a few days later I send this guy a message via Facebook and asked him again, are you sure? Again the answer was yes and so the ball was in motion and after a great talk on the phone with Kevin, my mate Erik Hakvoort and myself are now part of the team. I must say I have returned to where I belong and I will keep on fishing and catching on these great baits.

I started on my quest to catch carp at the age of 14, many moons ago and I still love it as much now 30 years on. In that time I've fished on small lakes, big lakes, rivers and canals here in Belgium, as well as in France and Hollandl. Although I favour fishing on my home soil Belgium, I woul... Find out more