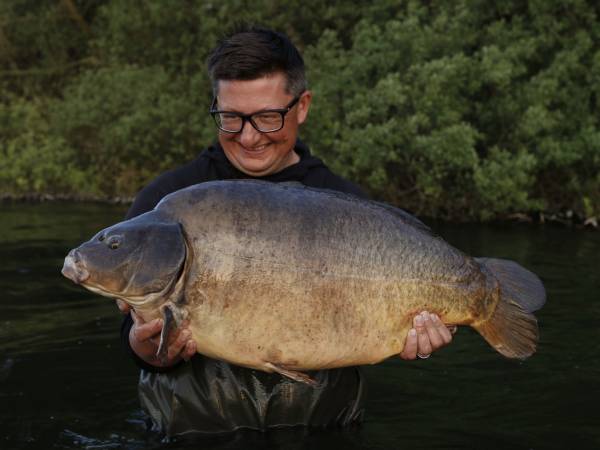 Danny started making leads in his kitchen way back in 1991, selling 2's and 3's around Walthamstow Reserviors for a few extra quid. He eventually left Nat West bank in 1993 and since then has grown Korda to a multinational terminal tackle giant employing almost 50 people worldwide.

Working in the tackle trade has not dampened Danny's passion for carp fishing and he still fishes 2-3 nights most weeks, currently on Wellington Country Park and a Beds Syndicate.

Danny presents the popular Sky Sports TV show Thinking Tackle plus a host of DVD's including the Underwater series and free DVD Carp Tackle, Tactics and Tips. A great deal of his time is spent either testing new products or showing the public how to get the best from the exhisting products in Korda's range.

Danny tries to adapt his fishing style to suit the water, the Beds pit is domimated by the spod where Wellie is all boilies, he feels the more strings an angler has to his bow, the better the angler.

Mainline Baits have been a huge part of Danny's armoury since he met Kevin and Steve on 'The Grange' in '93. He caught his first UK forty on Fusion several years ago and now has over twenty UK forties to his name from five different waters, most of them coming to mainline baits of some description.

Danny has fished in Europe for Many years, from the huge reservoirs like Chantecoq to the manicured holiday venues of Maison Du Lac Bleue and his own lake 'Gigantica'. His pb commons and mirrors from the UK and Europe have all come to mainline baits!

Danny has since gone on to revolutionize carp fishing, where his time is divided between Korda, Guru, Gigantica, Embryo and trying to squeeze in his own fishing, all while being a family man. Danny has a passion for helping others and is extremely approachable, making time for everyone, so if you see him on the bank or at a show, don’t be afraid to say hello.

You can’t buy confidence, can you?

I’ve been using Mainline Baits for over 15 years now, that in itself speaks volumes, if it ‘aint broke don’t fix it! ‘The Grange’ was developed on the lake of the same name which I happened to be fishing at the time, it turned ‘3 bites a season’ anglers into superstars! My catch rate trebled, not just there but everywhere I went and it was all rolled for you, total heaven.

Since then I’ve used whatever bait they have recommended with consistently superb results. From the Green Lipped Mussel to Active 8, Assassin 8, Fusion, CP2000 to name but a few. In fact Damian and I were lucky enough to win the British Championships in 2003 on ‘The Fusion’. Since then I’ve moved onto Pulse, Pro Active Pineapple, The Cell and now The New Grange, all have been superb. In fact, my worldwide PB of 62lb 10oz came whilst field testing the New Grange! I simply couldn’t comprehend ever using a different boilie such is my confidence in it.

They say you can’t buy confidence, well I disagree! It’s in the freezer section of your local tackle shop in a pink bag with ‘Mainline’ written on the side!