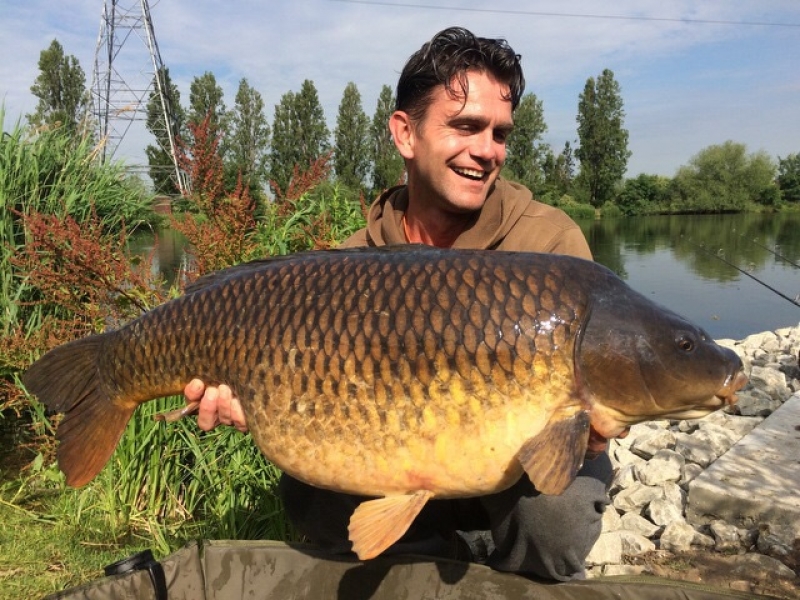 Scott Maslen has been on fire recently, fishing at his regular haunt, Walthamstow Reservoirs. The well-known actor has now banked many of the sought-after specimens in the Two & Three Reservoir, but hadn’t taken a forty from there… until now! Here’s Scott’s account of the capture of his new PB!

“I’d had quite a few fish over the last three sessions, including eight fish over thirty-pound. Things were coming right, thanks to my application over time. I’d been moving, spotting fish and mooching around when I could, keeping in touch with the carp.

On this latest session, I got down at 3pm to find conditions looking really good for the middle bank. While I was wandering, a guy had a 32lb mirror from ‘The Secret’swim and I could have dropped in next to him, but I thought that I’d leave him to it and kept walking up the middle bank of the Two, only to find all the swims taken. As I walked, the sun was getting stronger, and it was getting pretty hot, which immediately made me think that the shallows in the Three would be worth a look.

Once up there, I sat in the ‘Mud Bank’ swim watching. After a little while, I’d seen enough and flicked a couple of Hinged Stiff Rigs out onto the spots that I knew in the swim. The area has changed recently after they moved the boom, deepening the lakebed in a different area. The rod fished tight to the boom produced a cracking zip linear of 27lb.

When I returned the next day, the water was pushing strongly through the inlet in the same area, and I’d had good results when it was flowing like that before. The action of the inlet pushes the silt away, creating an area that’s both harder and slightly deeper. I flicked a couple of rigs out and they ‘donked’ down lovely onto the spot.

Rather than get the alarms out straight away, I rested the rods on a log at the front of the swim and, while getting the third rod sorted, the line on the first rod lifted up in the water and pinged out of the clip. I picked the rod up and it immediately bent double, with the fish ripping line from the clutch. As soon as it got into the flow from the inlet, off it went, with plumes of black slit coming up and bubbles everywhere.

Thankfully, after a few surges out into the lake, I was able to draw it over the net cord. Peering into the net, I knew straight away that it was a big fish. I carefully transferred the fish into a retainer before flicking the rod back out, because I knew that there was a good chance that more fish would be in the area.

One of the Thames Water staff, Greg, came round to help with the photos and when I came to lift the retainer from the lake, I thought that it must have been holding extra water because it felt so heavy! As we now know, it was all fish! On the bank, we identified it as the ‘Long Common’ and weighed it at 40lb 15oz, a new PB, and my first forty. I’ve had so many thirty-nines now; I thought it was never going to happen!

The action didn’t end there either. I went on to take fish of 32lb 8oz, 25lb and 22lb from the same area. I kept the action coming by feeding a mixture of Mainline Cell and Hybrid, just a few halved baits at a time, into the flow after each fish. I’d purposely let the bait get hot and sticky, with an attractive film of sugars on the outside, as I prefer to use them like this.

To have caught my first forty from Walthamstow, a complex that I love, means an awful lot. I’ve put in a major campaign on there in recent times, and have had quite a few of the better fish, including the Big Mirror at 38lb 12oz. The capture of the ‘Long Common’ means that there’s really only the one big ‘un that I’m still short of, which is the ‘Big Common’ itself.”

Scott’s successful setup was a Kable Leadcore leader, set up with the No-Trace system, down to a 3oz lead, fished on a Heli-Safe. The rig was Scott’s own take on the hinged-stiff rig, with a 20lb IQ boom, size-six Krank Chod and Mouth Trap hook section. His hookbaits were heavily soaked Banoffee pop-ups, which he pre-drilled to allow the Banoffee dip to penetrate fully. Scott then pushed a piece of cork stick into the bait to ensure maximum buoyancy and overweighted the bait with Dark Matter putty counterbalance.