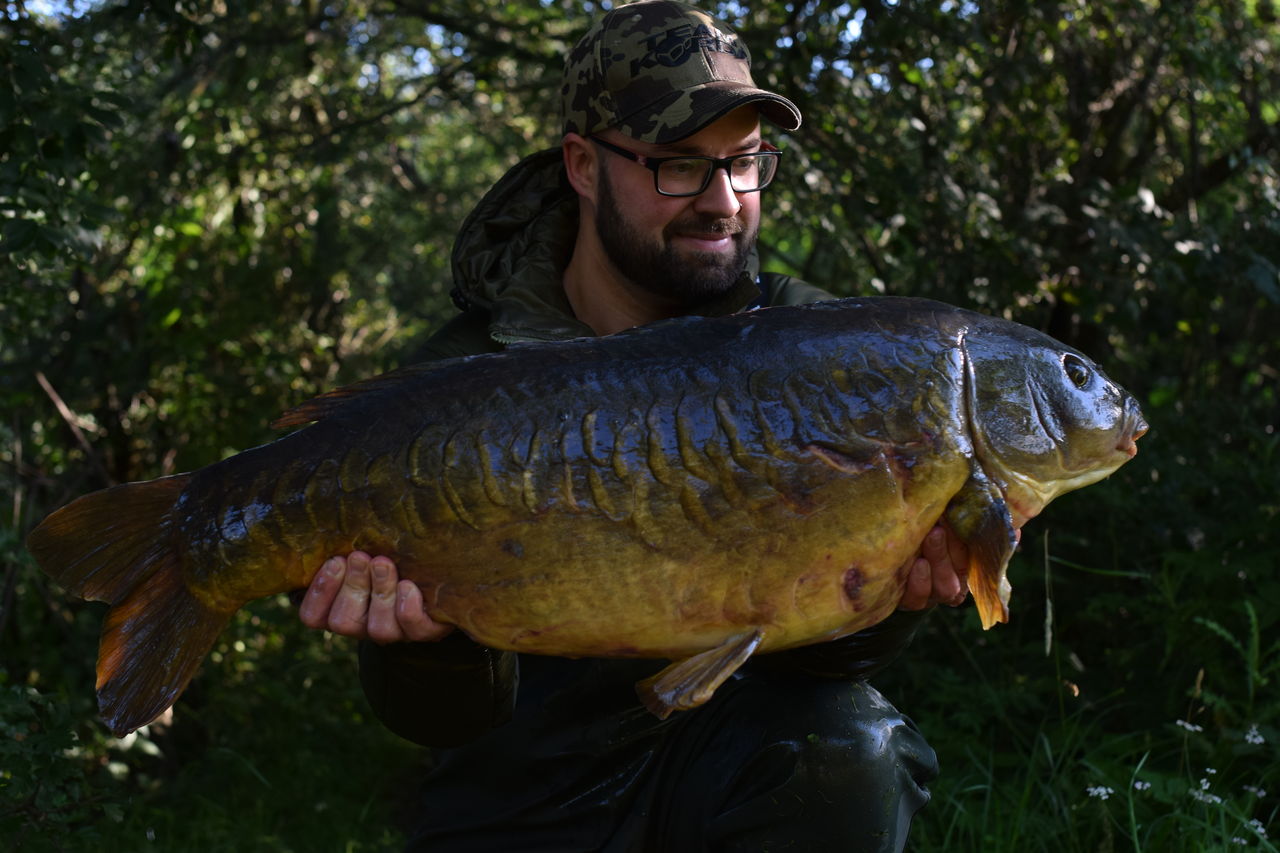 Lawrence East has been in contact following a short Cambridgeshire campaign to land his target fish - Loz takes up the story...  "Last year I saw a post from good friend Dave Little of a few carp and one in particular that instantly lit the fire inside and gave me goosebumps that I hadn't felt for a very long time,14 months passed and finally I aquired a ticket for the St Ives complex where Dave had caught these carp from. My first port of call was always going to be for what is 'in my opinion' one of the best on the complex, 'The Ivo Lin'.
My first session was at the end of June and to be honest apart from the odd piece of information from Dave I didn't really have a lot to go on apart from there was a ridiculous low stock of around eight carp. I think this was the only time I've ever put a double figure common in my retaining sling but not only was it my first St Ives carp but on my very first visit as well. A Cell pop-up mounted on a Spinner Rig with five 15mm Cell Freezer Baits that has been soaking in the Cream Smart Liquid did the trick. It's safe to say this little fella got the ball rolling on what turned out to be a lot shorter campaign than I had expected, I've been keeping the photo's back until the job was done, as I had the whole lake to myself on more than one occasion and I knew if the lin got caught the chances are it was game over for this year.
My second trip to the Ivo saw me face my first blank, well, if you dont count the five Bream and three Tench, I'd clearly got it wrong that trip but It was to be expected, I attempted to fish over a large 5kilo bed of Cell but rather than work for me, it certainly worked against me. When I returned home after that particular session it was a night earlier than I had planned and all I kept thinking about was the linear, I had to get back down there and the very next morning I made the two and a half hour journey for my final night.

Having started now to put a few things together from its previous captures, what it was caught on, where it was caught and where I'd seen it with my own eyes, I had a plan. Although I only had one night, much to my surprise and after just a few hours fishing my margin rods wrapped round and after what was probably the most explosive battle I've ever had under the tip this ridiculous common rolled in the net. Alright, it wasn't the linear but I was absolutely over the moon! Some of these fish were rare and this one was up there, I knew now I wasn't far away with two down and six or so to go. Self takes were taken and the common was slipped back like nothing had ever happened. Half a Cell Corkdust Wafter mounted on a D rig with a four half Cell boilies on a PVA 'stringer' was its downfall.
My fourth trip was this weekend and I made the long journey down to Cambridgeshire full of anticipation and excitement, we'd had some unbelievable weather leading upto my trip and before I left the house I made a joke and said "I'm catching the Lin this weekend, It's happening". After a good few hours searching for them I saw nothing and in the end I dropped back into the same swim I finished during my last session where I'd had that lovely common from. I found a silty gully at the back of one of the bars and when I had a lead around I brought back Bloodworm on my hook, winner! Two rods were placed just a few feet apart on Spinner Rigs, one with a white Cell pop-up and one with a Cell Corkdust pop-up. A handful of 15mm Cell and 15mm Fyber Freezer Baits soaked in FosOil and Cream Smart Liquid were catapulted over the top. A few hours passed when my margin rod bent round which unfortunately resulted in another Tench! Not the best of starts but when you're targetting eight carp in a pit that's literally full from top to bottom with silvers, Bream and Tench but it's to be expected. The rest of the day was uneventful and at first light the next morning the middle bobbin pulled up tight on the Cell Corkdust pop-up and the rest was history. 11 Bream, seven tench and three carp in my eight nights on the lake - now including the one I was after, The Ivo Lin!"