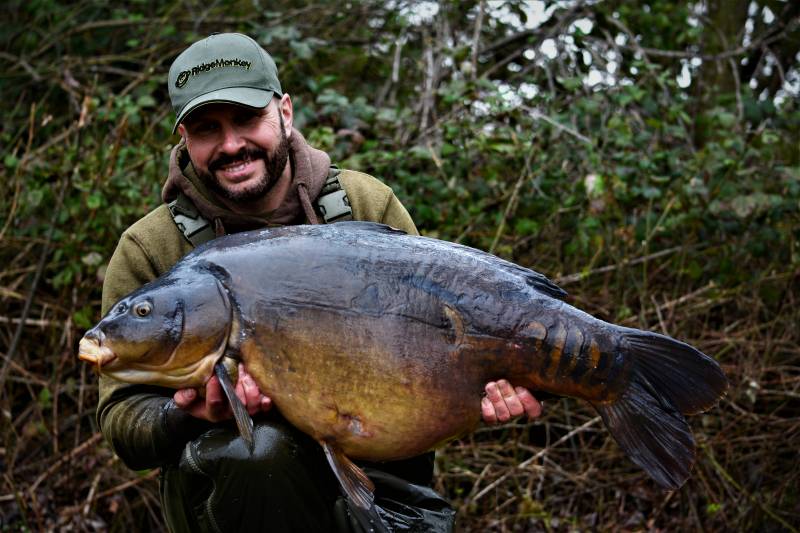 Mainline carper, Dave Levy enjoyed a superb first year during 2016 on RK Leisures Horton Church lake - landing a staggering 21 carp from just 35 nights fishing on the tricky venue. If it wasn't enough to fish with such consistency to see six fish over forty-pounds hit the net, Dave has recieved an even more impressive result during the start of his 2017 campaign.

Over to Dave to take up the story...

"Recently I got down to Horton and there had only been one bite in the last four months! I had baited a spot a week before with eight large Spombs of 15mm Hybrid mixed with a bit of Essential Cell. On getting to the lake I didn’t see any shows so decided to fish the area I’d baited the previous week. I wanted to keep the baiting situation light, so just used four Spombs over each rod.

During the evening a flock of about twenty diving ducks came over the spot I was fishing and the first bird that dived came up and flow off scared out of its mind, this was swiftly followed by the rest, right away I thought it had just been spooked by the presence of a big carp.

I was fishing a bright Pineapple Juice pop-up over the free offerings. The night pasted quietly and about 5am I was woken-up by a young swan swimming through my right hand line, I was now wide awake and lay on my bed waiting for the kettle to boil when I heard the braid crack from the clip on my rod followed by the screaming Delkim. I was half expecting to see the young swan going through my line, but the rod was bent over as a carp pulled line slowly from the tight clutch, I lifted the rod and the carp stopped hold out in the lake, slowly she come closer not really doing much, it kited left and I remembered that the year before on my second ever visit to Horton I’d lost a very big fish in a snag so I was taking no chances and reeled down lifting the carp higher in the water.

She turned heading away from the snag, but still she seemed to know where she wanted to go and headed for the overhanging trees. Again, I clamped down and she rolled on the surface before bolting deep in search of dying weed beds, I could feel the thick weed but kept the pressure on and up she came and I pushed the net out slipping it under the fish. I looked in the net and in the low light she looked a good thirty. I quickly fetched my head torch eager to look at the carp, as the light bounced off the carp it reviled just how big the carp was and definitely much bigger than I’d first thought. With thick-set dark shoulders and a black scar running along the top side I didn’t recognise the carp.A quick call to a mate and we zeroed the sling before lifting her on the scales.

I watched the needle swing round past fifty pounds! I couldn’t believe what I was seeing. We settled at a weight of 50lb 2oz. I was soon holding her up for the camera and although in a day when it’s carpy to not smile I couldn’t contain the joy of catching such a wicked carp, a fish known as 'Roger The Dodger'!"