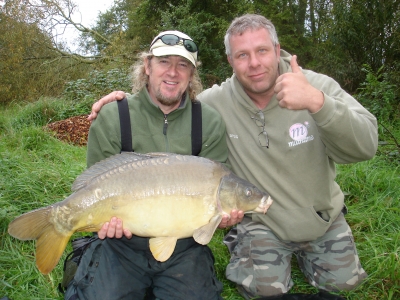 This nice little story started in Italy. I was out on a trip to see Iron Maiden play at Villa Manin. The lead singer Bruce Dickinson as most people know is a fully fledged airline pilot, as well as being the frontman of the worlds greatest band! Luckily for us fans, he charters a whole boeing 757 and fills it up with fans, flies them to a show, you get a photo opportunity (which in my case always goes wrong-see attatched photo!) and you get some stuff signed, then various freebies and usually access right down the front of the gig.

I had been on one before and loved it and just couldn't wait for this one. I met up with the other fans at Gatwick we flew out and watched a fantastic sold out show, all had a laugh and crashed out in the hotel, all very happy fans!

well untill the next day when I bumped into a chap called Laz, who runs the Iron Maiden fan club, as he had some news for me..

"Well you missed out there Spug!" Laz said as we jumped on the coach heading back to the airport, "whys that then?" I asked, Laz continued, "Well we found Adrian round the back of the venue (which was a old stately home that Napoleon used to live in) throwing bits of bread into an ornamental pond to some carp that were swimming around in it, we mentioned to him that you were on the plane, as we knew he had read your book and he said, "can you see if you can find him for me" so we came out in the crowd looking for you, but couldn't find you, unlucky Spug!"

Well of course it was unlucky, but I will be honest, I had had such a great time, that I didn't let it put a downer on things, probably when Laz had come out looking for me, I was sitting there with a beer on one hand, a burger in the other and staring at some fantastically spandex and lycra covered Italian "rears", so it was all good to be fair!

It turned out that Adrian had read and enjoyed my light hearted attempt at a book on Carp fishing whilst the band were rehearsing in Paris the year before.

Now I have followed the band since I was 15, first saw them in concert in 1986 and uptill now seen them nearly 20 times. When an album comes out, I buy a cd, maybe even the vinyl version too, when there is a tour on, I go to a show maybe two, get a tour t shirt and a programme and pick up dvd's along the way, they are my favourite band and have been for a long time. So the possibility of going fishing with Adrian was one that I really hoped would happen.

Luck came may way and a couple of e-mails and a phone call later, I was really chuffed, because We had arranged a date and through my connections in the fishing trade,a nice private venue to fish. I pretty much knew that Adrain was an "all rounder" where fishing was concerned and the capture of an incredible 8lb chub the year before had put him on the cover of Anglers mail with the biggest caught river chub all year, pretty impressive stuff, but this was going to be carp session, with a really good chance of a 30lb or even a 40lb'er

I got to the lake on the Sunday and in true Spug style at 2 in the morning I managed to "foul hook" a 34lb'er in the belly!. Monday came and so did Adrian, I met him outside the co-op and off we went to the lake. We quickly unloaded his gear and I left him alone to set up his tent and his rods for the 48 hour session we had planned, I went back to my tent, cast my rods out and hoped we would catch a few. A friend of Mine Steve Spurgeon of Fox fame was round the corner from us and had landed on the fish, catching an incredible three 30's that morning, things were looking good and I hoped we both caught a biggie!

Now a big part of carp fishing for me is what we call, "the social" and thats usually on an evening, when you all meet up, have a beer or two and get dinner on the go. So in the pitch black dark out came the lamp, on went the Ipod (best of Thin Lizzy if you're interested) and a nice steak was popped in the frying pan, along with some rissotto and peppers in the saucepan. A bottle of wine and a really nice chat later it was time to crash out, I walked back to my tent, popped a film on my dvd player and dozed off thinking how lucky I was and indeed what a nice guy Adrian was, well to be fair he's an angler too!

The next morning came and our rods were silent, Steve's weren't as he was still reeling them in one after the other, this wasn't what I hoped for, but hey thats fishing for you. Now I confess to being a bit of a lazy fisherman and will sit there and wait for it to happen but Adrian has more of the "hunter" side to him, so come the afternoon he was off and round the lake looking for the fish, as I laid there snoring away. next thing I knew was Adrian had Picked up his rods and was sneaking through the trees to try and "stalk" one behind the back of a small island, I slowly crept forward to meet up with him and was just thinking ,"he'll do well to land one here" when one of his rods ripped off and all hell broke loose, he made it look easy and I soon netted a carp for him, eventhough at one point I thought his rod was going to explode! at just under 20lb not massive but still in the cold conditions, with the fish not really biting, it was a result all the same. I hadn't actually asked what his biggest carp caught in England was but it turned out that Adrian had landed them up to just under 38lb, which is a big carp for England, even so he was happy with this one. It also gave me a quick up the arse with regards to my own fishing-note to self dont be so lazy, go make it happen!

The second evening came and Kev Kinght came down to say hello and bought us a fantastic indian from the local take out, good solid angling, especially as mine was washed down with a bottle of red and a couple of tinnies!! Through the evening we spoke Fishing and it transpired that the lake Adrian usually fishes has been dominated by the cell for the last year or so and he said he would give it ago down there.

Now what happened next,for me, is the best part of this story.....

The next week I recieved an e-mail with a story attatched, here goes, it read, "had a bit of a result on your bait, down my local lake, had a 38lb 2oz which was a uk P.B, then an hour later had a 38lb 4oz (so he broke it again!) and the next morning landed my first uk 40lb'er with this one weighing 41lb 3oz, all on your bait!" I nearly fell off my somewhat uncomfortable computer seat!

as we all know just to catch a 30 is a result, but to catch two high thirties and a fourty in one session is a very special thing for anyone to achieve!! awesome stuff, the e-mail finished, "Thanks for the inspiration, I 've even started watching films in my tent!" I was so chuffed, I had to laugh, little did I think that when I wrote that book, that it would eventually lead to that statement, I sent back a reply, "brilliant stuff, but please don't give up the day job!"

however the story didn't end there as a couple of sessions later he had nailed another couple of thirties and a new lake record and of course new pb. of 42.13!

See you on the bank 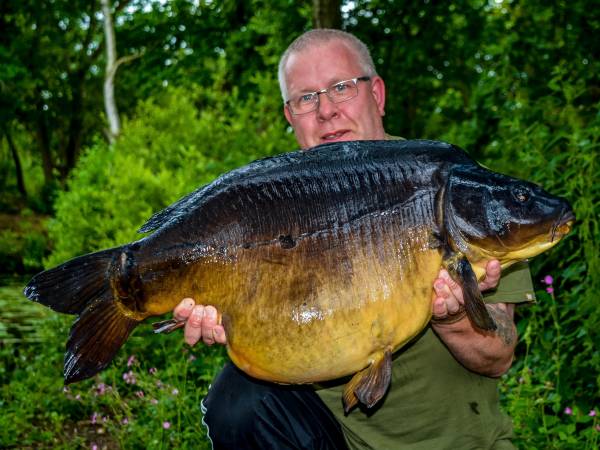 Carp fishing headbanger!! Been described as putting the fun back into fishing, love the social, love my mates and hey if we catch one then that's a bonus! Been using Mainline since 1994, with a brief three year gap when I worked for Solar Tackle. Claim to fame was only the 4th British angler ... Find out more