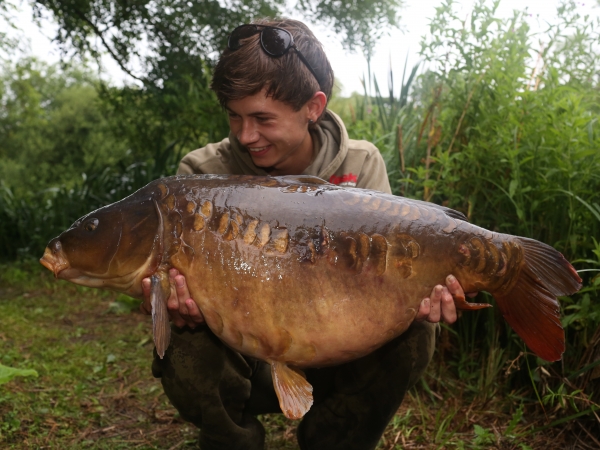 I first started fishing when my best mate, Kieran Panchal offered to take me fishing down a local pond one night after school. I remember us going into our local tackle shop, putting our money together to buy half a pint of maggots and a float for me to use – we ended-up catching four gudgeon that session and ever since then I’ve been hooked! My fishing slowly progressed throughout the year, catching more fish on the float then venturing out towards the middle of the pond with a feeder. Untill one day I caught a carp on the feeder and that was it - I had the carp bug.

My carp fishing slowly progressed through the years, moving from water to water, making it a little bit harder each time, in turn catching slightly bigger fish and having a friendly rivalry with Kieran trying to catch bigger fish than each other, each session.

My first encounter with Mainline Baits has to be a good three to four years ago now. I remember visiting a day ticket lake, which seemed much harder than anywhere else we’d fished. I remember fishing three day sessions and not catching a single thing whilst other people seemed to be catching constantly.

As we all would be, I was determined to catch and not let the lake beat me. So I had a little look on the internet and found Mainline Baits. With plenty of top anglers using their bait, I thought I’d purchase a bag of the newly released Cell and take it down the lake. As if it was fate, the next session I had two fish, not doing anything differently than before apart from changing my bait. Ever since then I haven’t opened a different bag of boilies. The Cell has caught me fish from everywhere I have visited and I’m sure will keep catching me fish in the future.

At present I am currently fishing on a local syndicate in the Lea Valley for some of the best looking fish I have ever seen! Size isn’t everything for me, I’d rather catch fish with plenty of character or ones that are simply stunning!