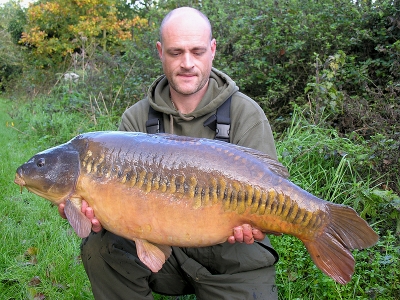 Winter has to be one of my favourite times to be out on the bank. Yes, the fishing can be much more difficult than in the warmer months but, providing you set yourself realistic targets, you can have a rewarding few months. The satisfaction gained from a cold water capture can outshine that from a summer one. Every bite is hard earned at this time of year but in return the carp tend to look better in their winter colours and are usually at their top weights.

I know a lot of advice given tells you to head for the shallows when it is sunny but that has not been my experience at all. I have found that, by far, the most likely places to find them in the cold are the deepest areas. This may well necessitate fishing totally different swims The best winter holding area I have ever found was 22ft deep with a steep sided bar at the far side.

On waters that consist of only shallower water I would look at snags, or another form of cover as my starting point. I would always, however, follow any signs that the fish may give you in preference to fishing blind.

In my experience winter carp are far more likely to give away their whereabouts during the hours of darkness. On Horton the fish would often show after midnight in areas that, only a few hours before, had appeared lifeless. These areas were where they would be bubbling the following day and with a hookbait in place there was a realistic chance of a bite. It was always worth a move or recast onto these spots as a cast during daylight, onto the fizzing would usually see an abrupt end to the feeding.

I used to purposely turn up at around ten in the evening to make swim choice simpler and set the alarm for one a.m. in case a move was required. I captured the Boxer in this fashion having observed fish showing in the swim next door in the small hours. Moving in the night definitely puts you a step ahead of most.

When fishing blind, in the absence of sightings, it can be a good idea to fish the rods at a variety of ranges. There is normally more room to spread them left and right so you can cover large amounts of water. Once any pattern emerges such as captures or liners you can then put all the rods at the right range. Keep altering hookbaits until something produces. A change from a yellow pineapple to an orange tutti can make all the difference. The third rod that many waters allow after November can be used to try something different such as a stringer, PVA bag or zig rig. Just one capture on something outside the norm could be the catalyst for many more.

I find big leads to be more suitable during the cold. I often find myself fishing at greater range than in the summer and I require a lead that allows me to fish at various distances, should a fish show away from the spots I am fishing. In addition conditions are often windier and a big lead will be less susceptible to being blown off course. Bigger leads will also be much easier to feel down in a crosswind.