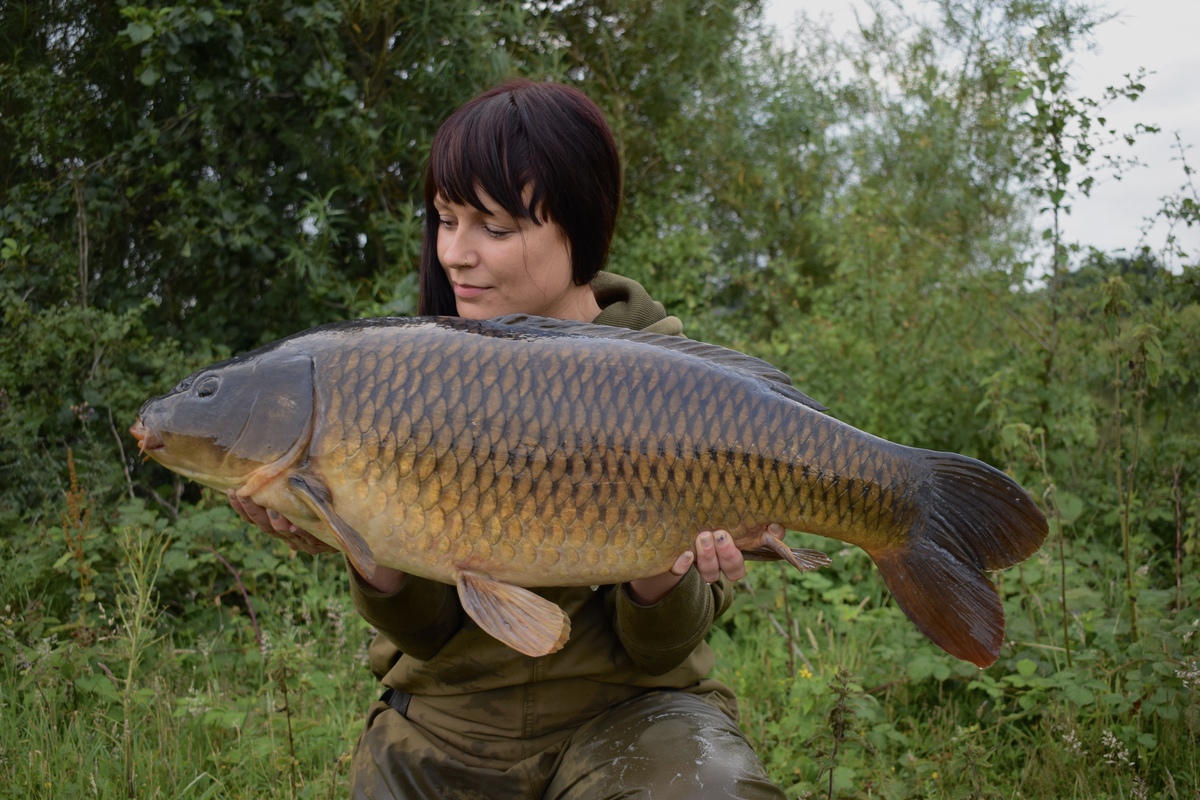 Sarah Brown talks through her 2020!

I’m sure most will agree that the year 2020 will not be fondly remembered, but at least in my case I can reflect on what has turned out to be my most successful year fishing in the 9 years. I am based in Nottinghamshire and fortunate to have access to some interesting gravel pits that hold some special carp. These carp tick the boxes for me, in that they are old, English, and full of character. Once Borris gave angling the green light back in late May, I was quick to get out and begin my campaign.

Now before I tell you about my year let me just take a moment to tell you a little about me. Like many, all my fishing is carried out on busy day ticket waters, mostly local to where I live in the Nottinghamshire area but for the exception of one. For the first few years of my angling I focussed more or less all my efforts on one complex in particular which consists of a few gravel pits varying in both size and difficulty. Mostly fishing the two main pits which are both over 30 acres in size and not for the faint hearted. I have however found myself flitting between three or four venues over the last couple of years, again all day ticket waters and all very busy, but I have managed to have some success along the way with some real lookers. I had planned to focus my efforts on two particular waters in 2020 and I had managed a couple of nights on each before the country went in to lockdown back towards the end of March.

Whilst climbing the walls during the lockdown it was beginning to look as though fishing was going to be busier than ever. And when we finally got the green light to hit the banks I decided to hold back for a week or so and see what played out. With people queuing behind pegs waiting for their turns I soon realised that I would have to put all of my original plans for 2020 on hold and find an alternative. I decided to return to where it all began, still a day ticket but with only 10 pegs on 16 acres and a booking system in place, it seemed as good a place as any.

Arriving at the venue I remember feeling shocked at the extensive amounts of weed that had bloomed already; in places it was as though parts of the lake had transformed into a field. Being back felt good though and what a welcome sight it was to see the swans with their cygnets and all the other species of new life that had been enjoying a peaceful spring - I felt like an intruder.

Conscious of the problems the weed would present and with most of the angling pressure seeming to be aimed towards the central part of the lake, on that opening weekend I ended up fishing a less popular corner peg which had a number of appealing features including; some deep margins, varied depths out in open water and an eggbox like feature just into the corner on the right side - the less appealing aspect was the blanket of weed close in that stretched 25yrds across the surface meaning my line lay would be tricky. Also, upon closer inspection with the marker rod it soon became apparent that the features in the corner that I wanted to focus my efforts on were also covered over in weed but by using solid bags I could present baits there without too much difficulty. I did manage one that weekend on the solids filled with Mainlines Spod and PVA Pellet Mix with a trimmed down Essential IB Balanced Wafter as a hookbait.

With the added knowledge that this particular area of the lake was not very popular with the natives, I decided during my first trip that with regular bait going in on those spots I could probably get them cleared off over the course of a few weeks; if the fish didn’t have the bait the birds would have! So, at the end of the session I spodded all remaining bait on to this area. I repeated the process the following week and much to my surprise on my third visit I could already feel a difference with a much firmer drop and a lot less weed being retrieved along with the lead. The use of Cell, Mainlines Hemp and Maize along with the new Smart Liquid (Cell) was clearly starting to pay off and it wasn’t long before I had the spot pretty much down to the gravel. I couldn’t wait for the Mainline Smart Liquids to hit the shelves, it just sounded like the perfect attraction for many different situations. Whether you want to add a little boost to your hookbaits or boilie straight out the bag or just add a little more attraction to your Stick mix, bag mix or even spod mix. I now find myself adding it to pretty much everything I do.

Throughout the warmer months I kept the bait going in the corner but by now the carp had started to spend a lot more time in the central part of the lake; where the weed had grown to the surface providing them with shelter and safety. Although I was catching fairy regularly from this central, shallower area, I could not wait to start focussing on my little corner spot as I was confident it was being visited on a daily basis by fish as it remained clean; I just needed to get my timing right. Once the temperatures started to drop, surface weed began to disappear and Autumn crept in, I knew it was time. Throughout late August, September and October I caught on every visit and on more than one occasion I had bites shortly after baiting up during my session, it was like ringing the dinner bell, as they say. The hard work had paid off.

The speed of which the fish started to clear the spot I chose back in May and the captures along the way has given me more confidence in a bait than I have ever had before. I have kept it simple using Mainline Cell that just refuses to grow old, matching Smart Liquid, Hemp and Maize Power+ Particles and every fish was caught using IB Wafters on the sharp end.

Although I’m still hoping to catch a few more before the year is out, I have to admit I’m looking forward to 2021 and leaving this year behind us! I will be continuing fishing where I have been this year as I have really enjoyed myself, catching some lovely old English Carp along the way.
For now, stay safe and enjoy your fishing. Sarah Brown.