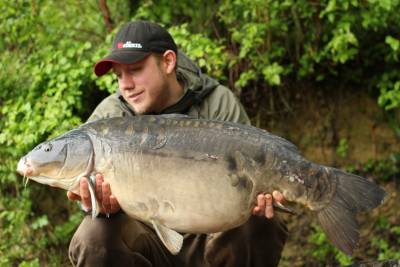 Nick Hill recalls a recent and very memorable trip to Marne Valley in France - armed with Essential Cell and full of expectations...

That night while having the BBQ social I told Pimmy where I had my take from, which lead us to talking about the washing line method using two rods one in the front of the swim and the other on the margin I was fishing to. By attaching the two together via a quick link and adding tension, this creates a washing line across the water to carry your used fishing rod across. Once back and one cast onto the bank I attached the two rods against large bank sticks up in the air my washing line was set for the week, there for no need for the tricky cast in waders and added disturbance. So across went my end tackle, I under clipped it from my washing line attached a 4oz G-force dumpy pear to my lead clip and my ever faithful G-force size 4 curve shank blow back rig armed with a pink Salty Squid Balanced Wafter to stand out for quicker bites. To place my rig I used a landing net handle with a baiting spoon attached to the end, I placed my rig in this along with a handful of crushed and whole boilies and a couple of handfuls of matching pellet before sending it out and dropping it at the base of the overhang. Now I just had to set my rod on the alarm with a nice tight clutch and that was surely a bite.

Half hour later and it was away! I put the quick bite down to the minimal disturbance, this was a deadly tactic and one I was looking forward to exploiting throughout the week. A short battle commenced before a dumpy 33lb common lay in the net. A few quick self takes and she went back and the washing line was back in use. I landed one more that evening, a small 24lb 8oz common on the same rod before it went quiet for the evening. That next morning all hell broke loose, with a take on first light from the margin resulting In a 31lb 10oz common, then within 15minutes of replacing that rod while the fish rested in the floatation sling that rod was away again. Just as a 24lb mirror slipped over the cord my open water rod roared off, lucky for me I had a second net set up and ready to go. After hugging the deep margin for a short while the battle was won and a larger mirror went in and it was a cracker to boot. Result!

Luckily Ross had seen the chaos and was on his was round to weigh and photograph. The larger mirror was the pick of the bunch at an irrelevant 38lb 9oz. The rest of the day produced another three bites all coming from the margin rod with a 26lb 10oz common, a low double but gorgeous zip linear and a 28lb common.