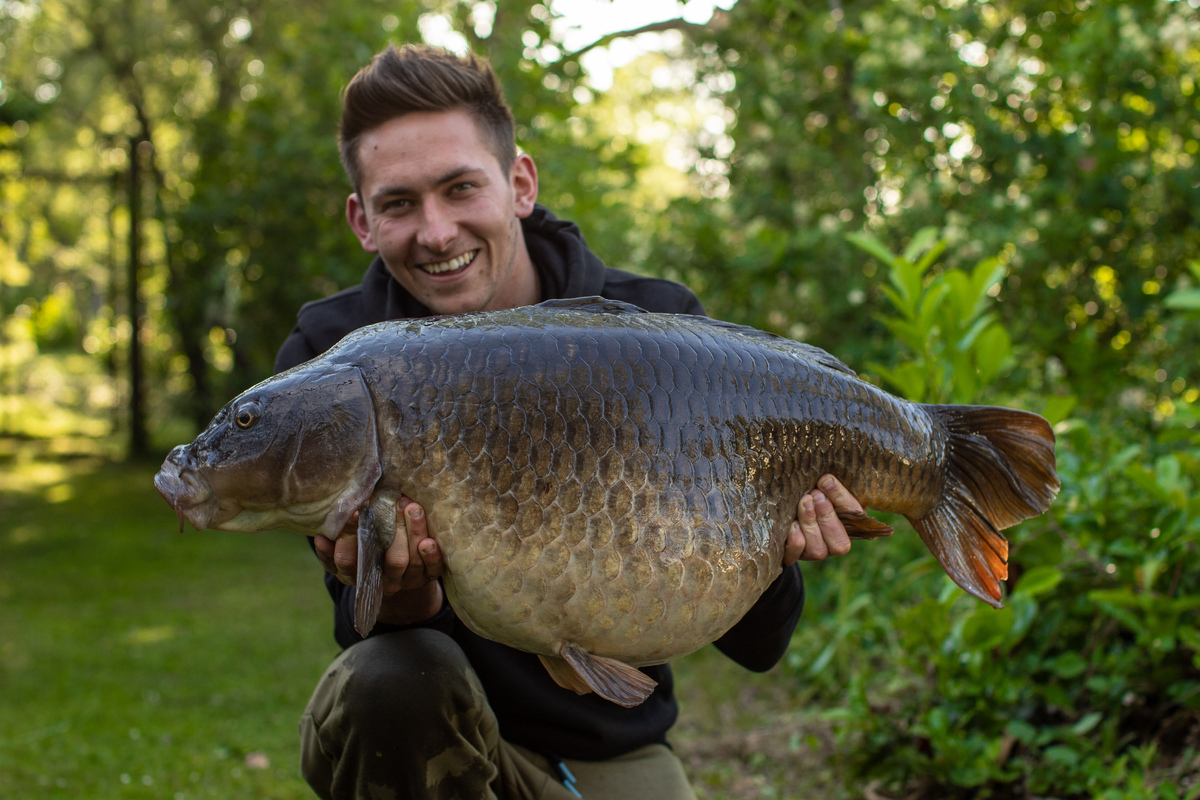 Mainline carper, Tom Gibson reveals the baiting strategy he has been using to great success on his syndicate water...

Approaching a new water can always be a bit of a daunting prospect, but with a solid baiting approach and a few tweaks, you can always put the odds in your favour. This is the exact scenario I found myself in back in the spring as I set my sights on a very private and special water down in Cambridgeshire. Steeped in history with a relatively low stock, it was somewhere which would require a lot of effort in every department. With roughly a 200-mile round trip to contend with just too wet a line, I needed to think fast and suss it out sooner rather than later.

To give you a feel for the place, it's around 5-acres in size, relatively shallow with a scattering of deeper areas amongst a sea of weed, which dominated the lakebed. It would be the deeper areas that I'd be looking to target, mainly to keep my bait away from the swans that loved to polish off any bait within a few feet of water. The main difference apart from the depth in these deeper areas was the presence of silt instead of weed. Now I've fished over silt on countless occasions, but this was different gravy! Prodding from the boat with the oar would release decades of the stuff, as well as gas trapped under the lakebed, which did raise a few concerns in my mind especially when the stench hit my nostrils! Due to the relatively low number of people who fished the lake, spots like these couldn't get fished all the time which I loved. The fish have never seen pressure and act like carp should - something that made me fall in love with the place even more. Anyway, let's get on to the nitty-gritty before I blab on too much about the venue!

After quickly being told that fish meals were the way forward on the water, it was a no brainer as to which bait I'd be grabbing from the freezer. I've used The Link prior to its release and have done ever since. It's a bait I've got huge confidence in and I don't tend to divert away from the range now, there's just no reason - why I would!

So, how would I look to combat the smelly stuff going forward? For those who've fished over silt before will no doubt re-live the moment they've reeled in to find their hook bait stinking, as well as taking on the colour. One way to combat this is by using liquids and it's something I've had to adopt massively into my angling. By giving the boilies a protective layer and soaking them, it counteracts and slows down the process of silt being taken on by the boilies. There're various ways in which you can do this, but I'll concentrate on how I liked to apply it prior to each session.

The first and quite obvious thing would be to get the boilies out of the freezer and air dry them for roughly a day, prior to each session. I didn't want them to be dried out to the point of no moisture, but soft enough so they were thawed out. I wanted the boilies to be super-attractive and soft inside. My thinking at this stage was to have all manners of sizes in the mix too. I wanted crumb, chops, flake, 10's 15's 18's. You name it, I wanted it in there! I'll come back to the reasoning on this later in the piece.

So, at this stage, I'd combine all the sizes into a large bucket and then put half of the quantity through a crusher and boilie chopper to give me the above mix. You should now have two buckets, one with whole boilies in whilst the other has the variety. Now's the time to add the liquid. Starting off with your whole boilies in the bucket, lace them in the Dedicated The Link Stick Mix Liquid. Not heaps so they're drowning, but enough to give them a good coating all round. Next and little at a time, add a scoop of the crushed mix into the bucket and give it a stir. What you'll now find is the crumbs and flake cling onto the whole boilies, giving them a thick crust.

Slowly add more to the mix until you can see the it drying up. Once this happens, just add a little more liquid to ensure there's an even coating throughout. The thickness of the Stick Mix Liquid combined with the crumb of boilie would not only give the bait masses of attraction through the water and a protective crust, to ensure the silt would be kept at bay once it fluttered down onto the lake bed.

Going back to the reasoning behind the variety of sizes, it wasn't to 'keep them guessing' which seems to be a well-used term these days, but to encourage everything into the swim (minus the swans of course!). The roach in the venue are prolific and would eat anything they could get their lips around, but by them creating a disturbance by picking off the tiny bits of crumb which floated through the water column when I baited up, I was sure the carp would be interested to see what the fuss was all about. Putting this back into a fishing situation then, I knew I'd sacrifice some bait to the silvers but the liquid and larger baits would remain until the carp arrived. For me, the approach was all about maximum attraction in comparison to visual appeal and to say I'd nailed it first time would be an understatement!

They'd almost instantly homed in on the spots with me catching three on my first night on the venue including a very sought-after mirror. From then, I guess the rest is history! Every session as I left, the rest of the mix would go onto the spots in preparation for the next, and if there was an opportunity to make a trip down... I'd be there. I'm under no illusion that I'm fortunate in the job I do that I end up finding myself bankside from time to time to film and do the necessary media for product photography, but I certainly wasn't complaining if it meant spending an extra night in Cambridge after the duties of work! Make the effort and when the rewards come, you know you've earned every bit.