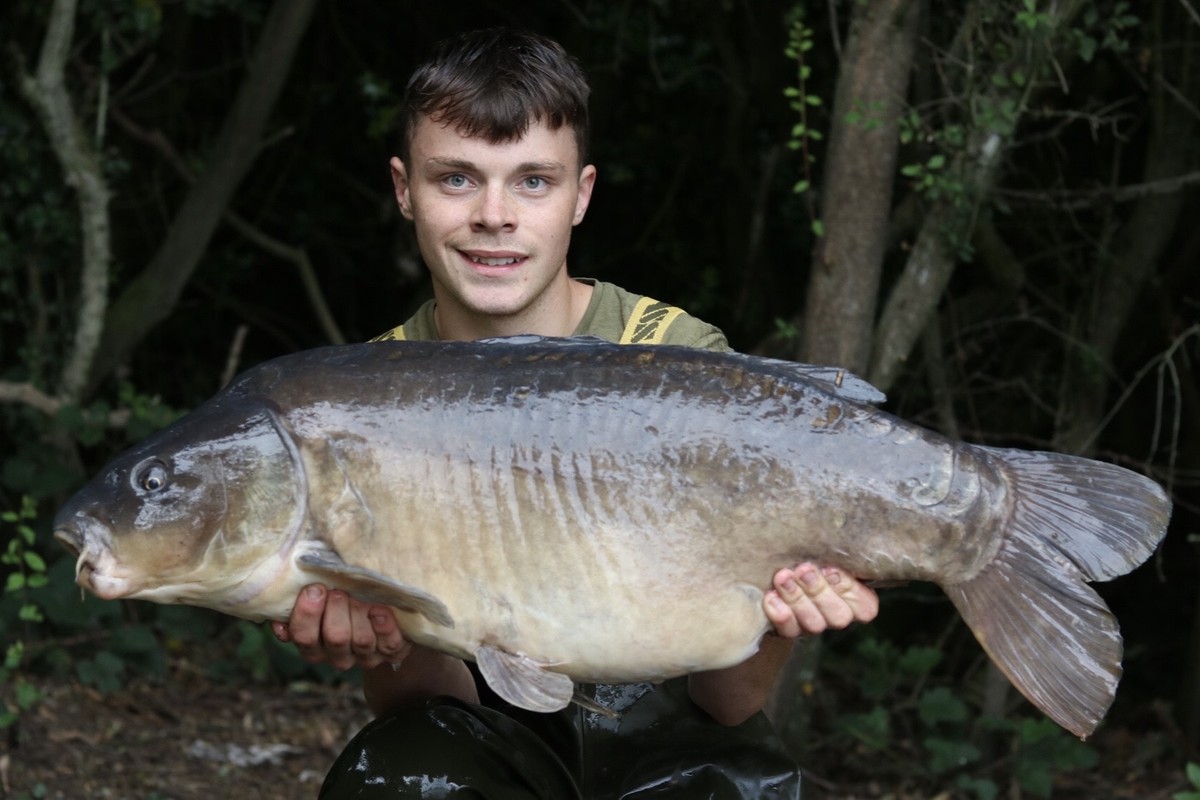 Adam Biddulph 2020 Round Up! Posted by Mainline Baits

Without a doubt 2020 has been my most successful carp fishing year I have had to date. Like most my spring was lost to the Covid lockdown, but not being able to get out just made the buzz and drive to go fishing and catch carp bigger than ever for me. I couldn’t have been more eager to get out and catch them. Once we were given the green light to go angling, I set myself a challenge of catching my target fish, and I still felt like I had unfinished business on a 90 acre reservoir I was focusing on leading up to lockdown. The option to move on to pastures new was there, but in the back of my mind I just knew I had to catch this certain carp.

The carp I wanted to target is a very special fish to me. As a young lad of around 14 years old I would dream of catching it, and I dearly wanted it to be mine. Inevitably by the time I got round to starting my campaign I wasn’t the only angler who had this one fish in mind. It seemed like everyone on the lake was planning on completing the same mission. This 90 acre reservoir in Cheshire is the home to this very old carp, which a few people have been lucky enough to catch. I had this year planned out, I wanted to hit the ground running in spring as this fish loves a capture early season. Due to COVID my plan wasn’t possible and it pushed back all of my other plans for the rest of the year. So, during lockdown there was only one thing on my mind and that is catching this mega old carp!

Luckily, I know the reservoir quite well, I knew what bait I would be using, it was a matter of trying to get on the carp and fishing with 100% confidence having chosen to go with 15mm The Link boilies along with Tiger Nuts from Mainlines Power+ Particle range. The reasons I wasn’t adding any smaller particles is due to the nuisance fish present at the ressy. Also, in big winds that you often experience on this type of venue I believe that a lot of it would be carried away with the tow. Anyway, to add extra attraction to my Freezer Baits I added a good helping of The Link Stick Mix Liquid plus a coating of Smart Liquid. I wanted these liquids to soak into the bait as much as possible. For me, a boilie is like a sponge which you can supercharge with your own liquids, if you wish. This will help boost the overall attraction and give you a little edge. The plan was to fish this mix over two of my rods, with ‘straight out the bag’ 15mm bottom baits tipped with either a 12mm Milky Toffee pop-up or a Shellfish Black Pepper 12mm pop-up as hookbaits.

So, it’s just after we had been given the green light to go fishing, it was a Friday and I was at the reservoir after work. I managed to get into a fancied swim on a new, NW wind and I knew that it would only be a matter of time before the fish turned up on it. Super keen I got my rods out in the area I had in mind. Fishing at 60 yards I applied a generous amount of The Link and Power+ Particles Tigers over the top. The day passed with nothing to report, but I was in position to intercept them. At 6am my Delkim screamed off and after a long battle the culprit had graced my net. My first carp for a good few months, nothing massive, but it was a great start to the campaign and I was one step closer to the one I dearly wanted.

Later that week I was back on for a couple of nights, but the lake was even busier than before, and the fish were mega spread out, coming from different areas of the reservoir. In the end I followed one of my mates into a swim which had done a couple of fish and also had a bit of form for doing fish. As it had worked on my previous session, I set up and applied the same tactics, which this time resulted in a bream at 2am. When I woke up the reservoir looked like a millpond and the only thing that was making a ripple on the water was the carp crashing out in an area of the lake where I had fished before, an area called “The Shale”.

Choosing to react to this activity quickly, I packed up all of my gear and mooched around to the area I’d seen the fish - putting two hookbaits on them with three bait stringers attached. Three hours passed uneventfully, and I felt that it was now the time to put some bait out and prepare my rods for the night. An hour after getting the rods out my left-hand rod was away and I was hooked into yet again another hard fighting carp! I managed to land the fish and as I peered into the net I had noticed that it was a better one for the lake resulting in a mirror carp just shy of the 25lb mark. It wasn’t the one but it was a pristine mirror carp. My confidence at this point was sky high and I knew the biggun wouldn’t be far away. Preparing my rod yet again and sticking it back onto the zone and sat back with confidence knowing it was only a matter of time. Shortly after, the same rod was away but this time the fish was holding its ground in the deep water. Plodding around I knew it was something bigger, the battle lasted a solid 15 minutes and when it came up I instantly knew which fish it was. My target fish was in the bottom of my net! Phone calls were made and my dad hurried down to do the honour of the taking the pictures. I was on cloud nine! A Cheshire 30lb mirror in my photo album, it weighed 30lb 10oz at a proper spawned out weight, but who cares my time on the lake was now done and I could now move onto my next challenge - an historic Mere in Cheshire and let me tell you that lake was very, very kind to me this year!

As a round up I strongly believe that with adding the Smart Liquid and Stick Mix Liquid it made a huge difference. In my opinion the Smart Liquid is the best liquid I have ever used due to its attractive properties and how it behaves underwater, I feel that confident with using it, I know that no carp can resist!

Normally for me I plan my year around carp matches, but due to COVID most of them had been cancelled. The likes of BCAC and also the BYCAC. So, I thought what I wanted to do now. I had set myself a plan like mentioned in this article of fishing on this Reservoir. Not knowing I was going to catch this fish as fast as I did I hadn’t planned what to do after. So, I moved onto a very famous Cheshire Mere where some very big names in the Angling world have made a name for themselves as such. I’m quite lucky with my job as an apprentice plumbing and heating engineer where my boss is a carp angler so he understands what I do and how it is. I can get off work early on a Friday to get to the lake and do quick overnights between work. On average I do two nights a week but sometimes I am able to push it to three nights.

With this year going very well for me next year I will be on to a new lake, I have a few plans lined up but all of that depends on my driving test. If all goes well I will be approaching a deep sand pit in Cheshire which holds some mega old carp and for Cheshire standards there’s a few lumps in there!